Depot WPF branding agency developed the brand for the Industry Development Fund (FRP) that was created by the Trade and Industry Ministry for financing import-subsituting projects in industry and technology. FRP became one of the first governmental institutions with bright and friendly identity. 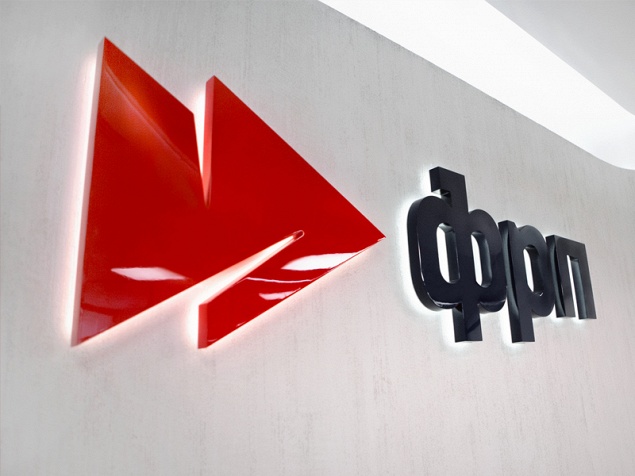 The Industry Development Fund  was created upon the initiative of Trade and Industry Ministry of Russian Federation. Its main tasks are modernization of Russian industry, creation of new enterprises and providing of import substitution.

The fund offers preferential terms for co-financing of projects aimed at the development of new high-tech product, technical re-equipment and creation of competitive enterprises. For the implementation of these projects the fund provides for entrepreneurs loans from 50 to 500 million rubles at 5% rate, encouraging the flow of direct investment in real sector of economy.

In the present circumstances this institution is very important for our country because the fund gives business a real opportunity to develop “right here, right now” and, despite volatile economic environment, to produce products that can compete with foreign analogues, to create the industry of the future.

In addition to preferential loans the Industry Development Fund became for the industrial entrepreneurs kind of “single window” where one can get quality advice on different state programs for industry development. 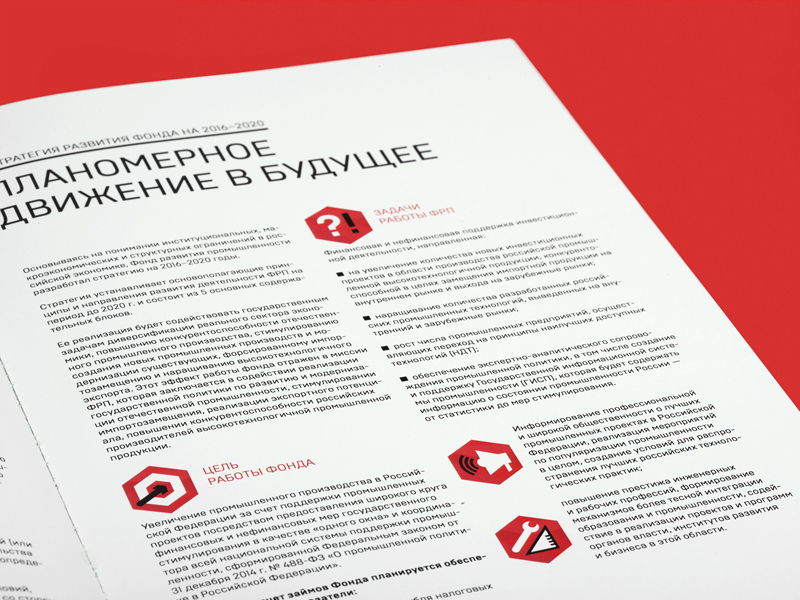 Depot WPF team was tasked with developing a brand for the new fund, a brand that would reflect its openness and mutually beneficial partnership with all target audiences and would also inspire a stable association with development and onward movement. At the same time, the fund's management strove to distance from the image of government, bureaucratic institution both in communications and in real action.

The project was complicated with the fact that key target audiences of the fund, government institutions and entrepreneurs, are used to entirely different tones of communication. The Industry Development Fund should have become a bridge between them by creating a significant product for both sides and by building up a communication system that would be understandable both for public administrators and business representatives. 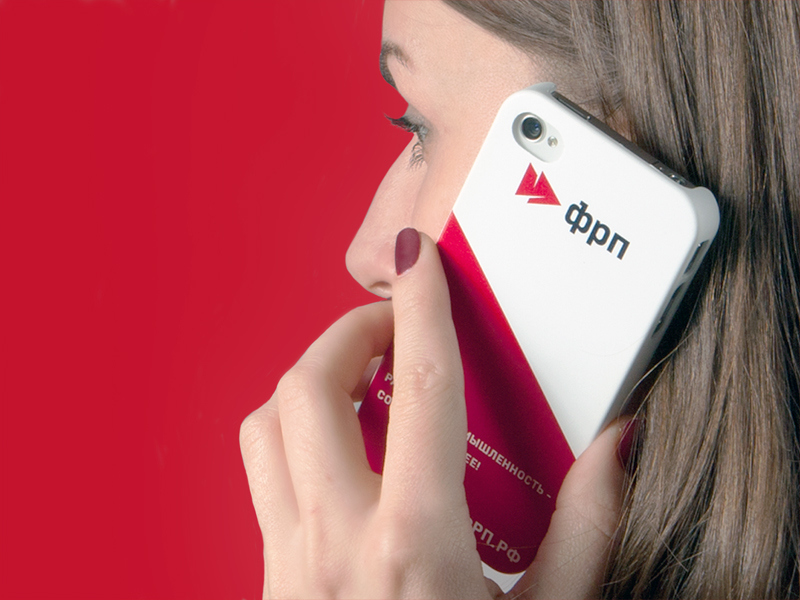 The fund's brand developed by Depot WPF successfully responds to the challenge. On the one hand, the fund has some features of a government institution (like stability, sustainability, confidence), on the other hand, it fits well into a series of commercial brands.

“This is one of the first Russian government projects that is bright and “with a human face”, — creative director of Depot WPF Anastasiya Tretyakova comments. — The fund's logo can be easily imagined both next to the national flag or the coat of arms of Russian Federation and among the logos of most sophisticated and client-oriented commercial companies”.

The double arrow that provided the basis for the fund's logo is a simple but meaningful image. This arrow depicts both accelerated onward movement and mutually beneficial cooperation (two elements of the arrow are moving “in a team”). The disconnection of lines adds enhanced impetus, while red color emphasizes the idea of leadership and development of “national champions” in industry. The acronym FRP is intentionally created in lowercase letters: this reflects the commitment of the Fund to communicate with its audience as equals and use the language understandable to the business. At the level of visual perception it's not about support and subsidizing, it's about cooperation.

Great emphasize in brand development has been placed on simplicity, openness and friendliness. FRP is transparent to everyone: higher authorities understand where the money goes and the entrepreneurs understand how to get this money. All the elements of the fund's corporate identity emphasize it — from simple symbol and writing in lowercase letters to site design and interior solutions in which a maximum amount of transparent and translucent materials is used.

“In 2015 we launched an entirely new development institution. We understood ascertainable skepticism of business towards any government initiatives. At the same time, it was obvious for us that “long-term cheap” money for the industry is the solution that market has been waiting for, — head of the department for external relations of FRP Andrey Gorodov responds. — Loans at 5% rate give a real chance to create the best, innovative enterprises in our country. The success of FRP in the beginning depended on whether the best Russian enterprises believe that criteria and selection procedure are truly transparent and unbiased. For that reason our objective was to speak a common language with business, which is simple and open one. It was important to place emphasis in the identity on development and leadership. The team of Depot WPF completed these tasks quickly and qualitatively. The result has fulfilled and even exceeded our expectations”. 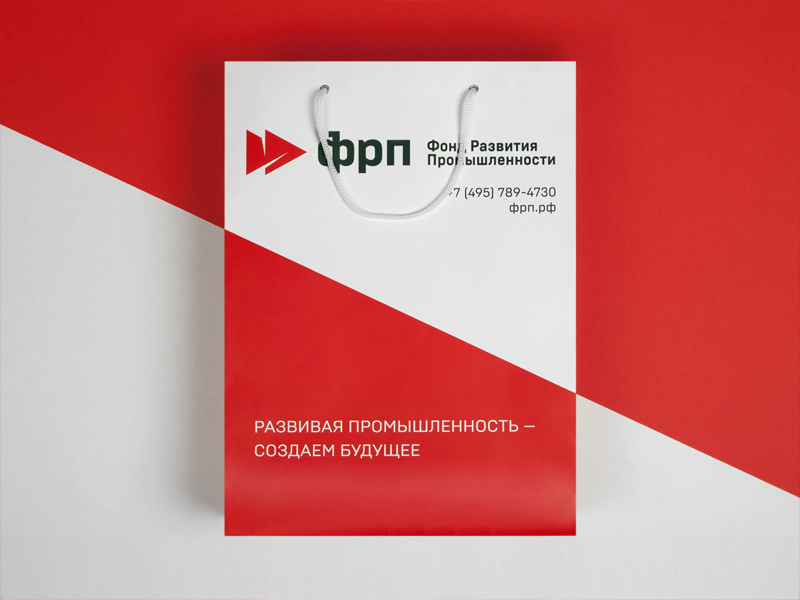 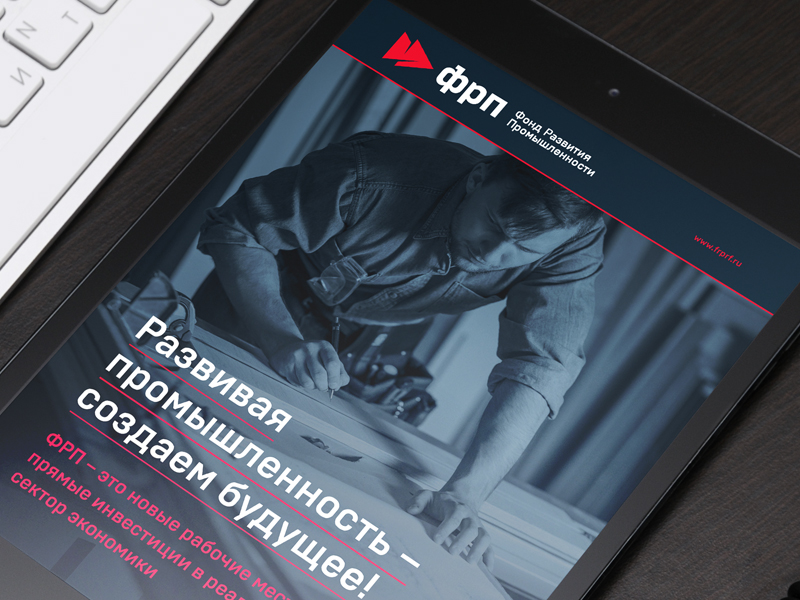 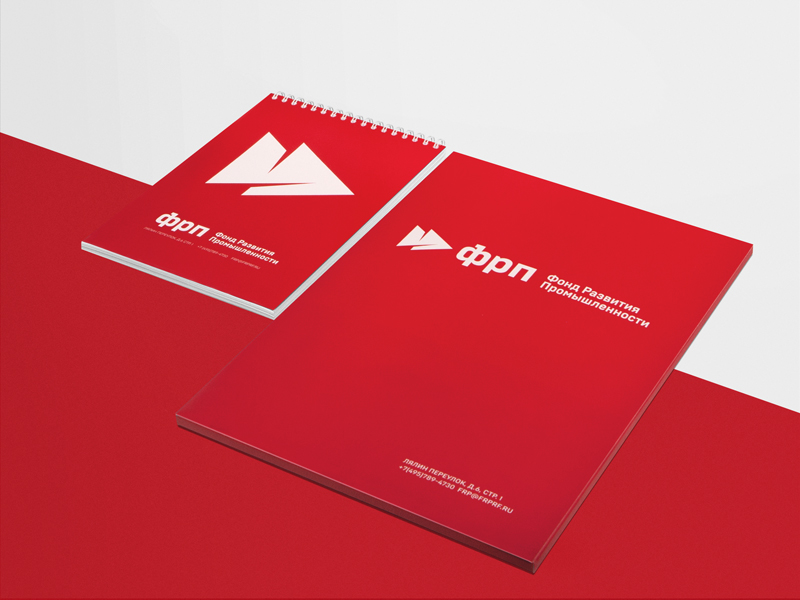 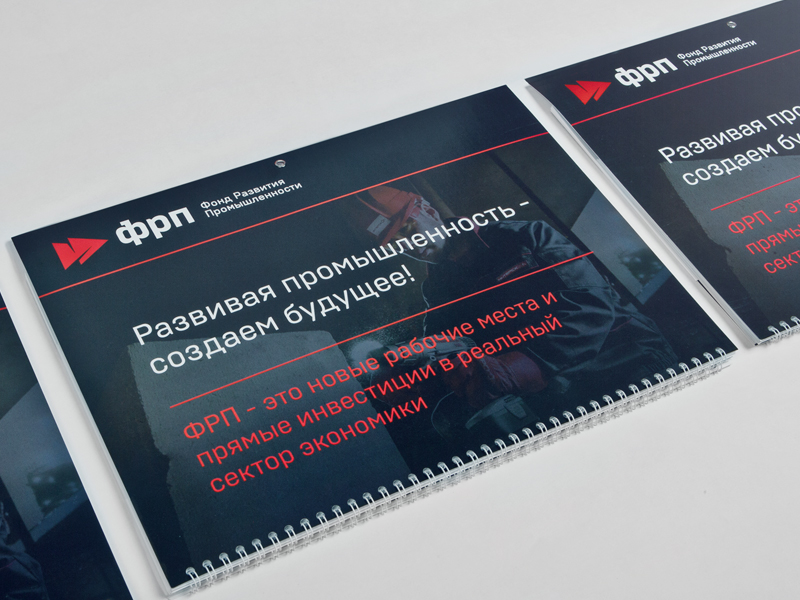 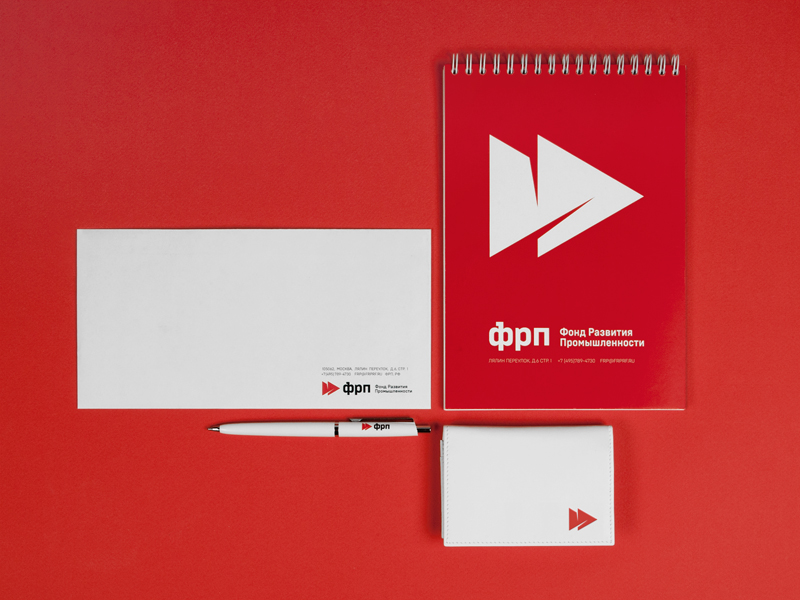 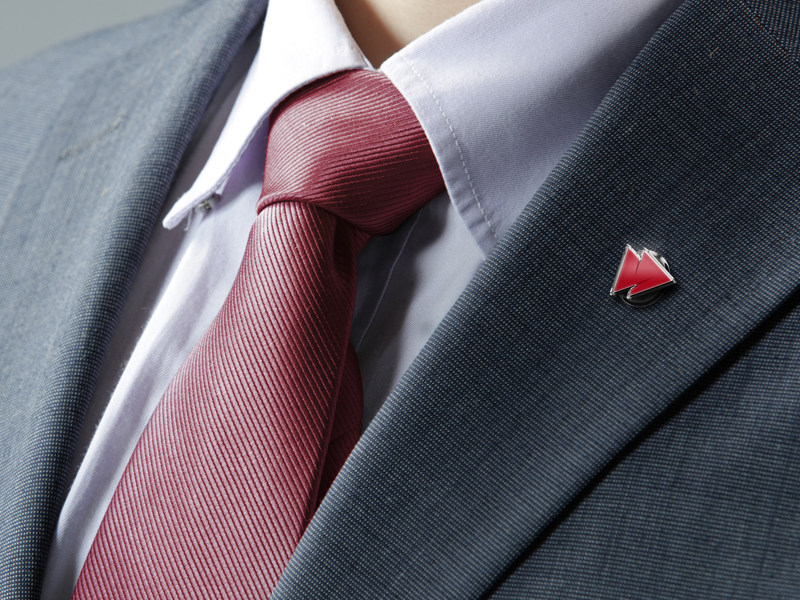 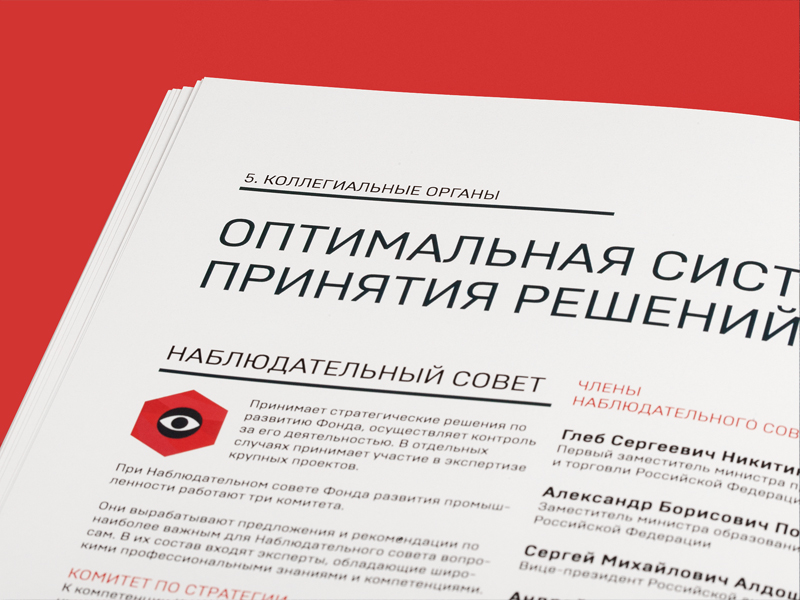 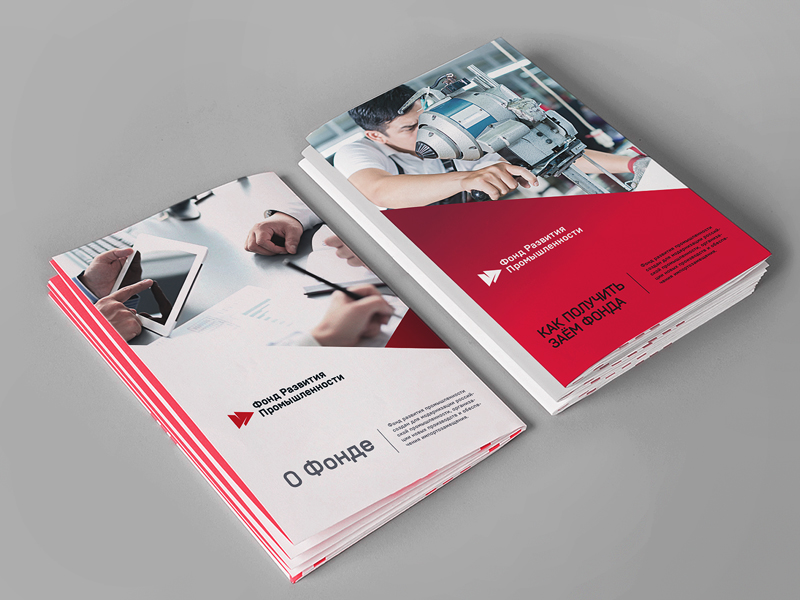 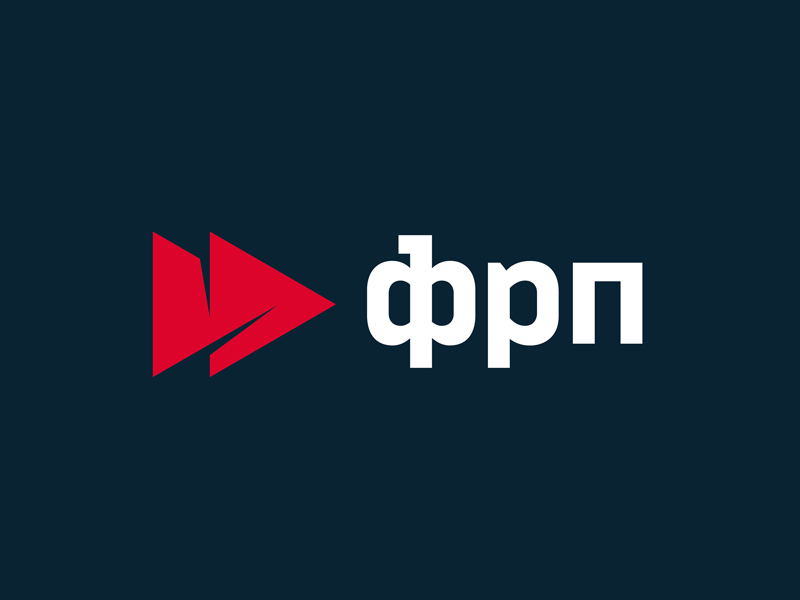 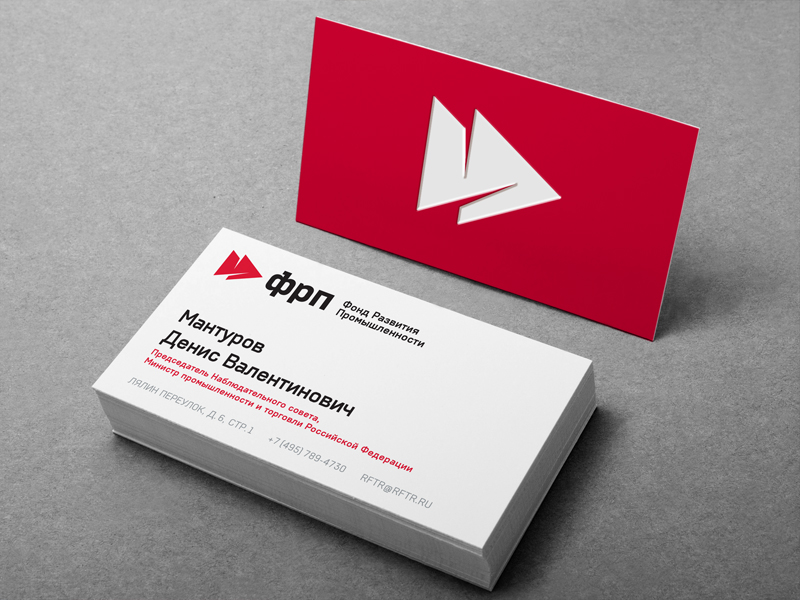 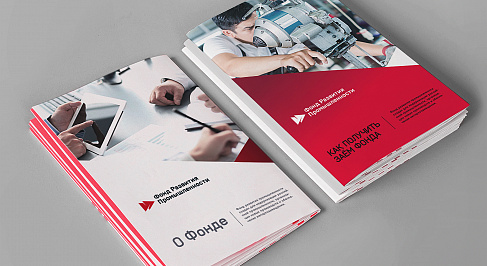