Milk for 30-year-olds: how to create a brand for 3 million rubles, which won the "Magnit", Metro and “Aeroflot”

Bryansky dairy plant, an enterprise with a 45-year history, finally reaches a stable profit. The renewal of the brand and new packaging with a minimalist design (by Depot) has played an important role in this.

In February 2018, the company ordered the brand concept and packaging design from the Depot Agency. "We had an option to work under one of the existing brands, but most of them were already more than 10 years old, they have lost relevance", says Ryabtsev. The task of the plant was to make a name for themselves simply, but loudly. By August, the Agency had developed eight branding options for Bryansky dairy plant, of which the plant chose two: the final one with a minimalistic design and a talking inscription, and another with futuristic images of scales, conveyors and aseptic tanks. We made the final choice in favor of the first. Branding experts have reasoned that white packaging, precise shapes and words highlight the product on the shelf more effectively than pastoral motifs. "You can imagine that a milk shelf is a kind of space where all the brands are trying to shout over each other, and one just says: Hey, man, I have good milk. Everyone is shouting, but he is not", explains the logics the managing partner of Depot Alexey Andreev.

As a result, each product in the line (there are seven of them) has its own color and text block. "No cows, no meadows, no fields, but just an inscription with the same name of the plant: we are the manufacturer, this is our milk," says the General Director of the plant. The packaging design cost Bryansky dairy plant 3 million rubles. In addition to packaging for products, the Agency has created an identity for Souvenirs with the same design. And on the door of Ryabtsev's office there was a sign with the inscription "Director of Bryansky dairy plant" in green, as on a package of milk. "Cleanliness and neatness subconsciously bribe people. If they have such a package, it means that the factory is neat, so they are pedants", says Farhad Kuchkarov, Director of strategy at Depot. 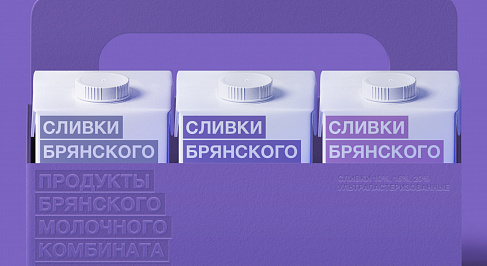